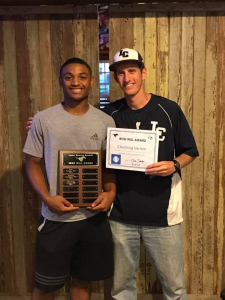 Brandon Strother is the Head Baseball Coach for Lamar Consolidated High School.  This will be his 5th season as the Head Varsity Coach and his 9th Season overall at Lamar.  In 2011 and 2012 he was an assistant coach and Freshman head coach for the District Champion Lamar Mustangs.  The 2012 Team went on to the 5th round of the playoffs and a school record 28 wins. As a head coach he led the Mustangs to the 2017 Playoffs and has had 7 First team All-District Selections along with many other awards for his players.

Coach Strother is a graduate of Texas A&M University with a degree in Sports Management and minors in Coaching, History, and Business. He is married to Tracey Strother (10 years) and has two children, 7 year old Brooklyn and 5 year old Peyton.  They live in Sugar Land, Texas.

Coach Goodwin graduated from Wortham High School in 2004 and attended Stepehen F. Austin State University.  He graduated in 2009 with majors in both Kinesiology and History. Coach Goodwin’s coaching experience includes linebacker coach at Garrison High School 2010-2012 (Two time state semifinalist) and offensive line coach at Pasadena High School before coming to LCHS.  He is the Offensive Coordinator/Offensive Line Coach as well as sophomore Baseball coach here at LCHS.  He has been happily married to Jillian Goodwin for five years and counting.

No Events This Week

Events are added by athletic staff.
View All Events